A Stroll Through Central Park 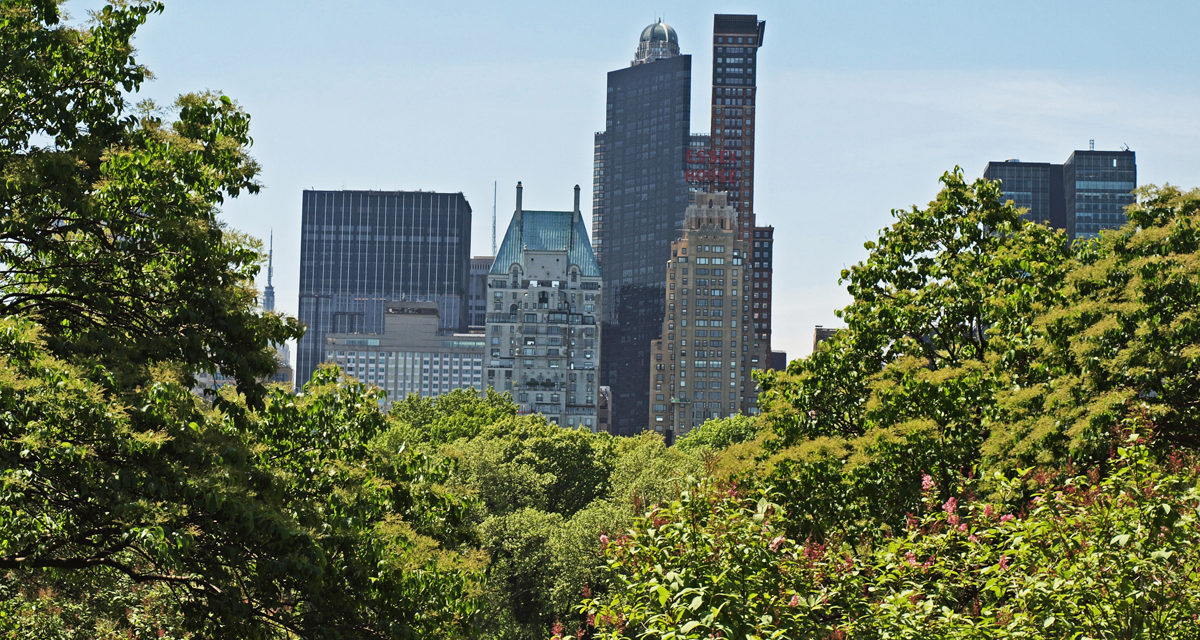 One of the most famous spots in New York City is Central Park. While it’s high on the list for most tourists, many only spend an hour or so wandering around it. I have always thought the Park deserves a little bit more time than that for two reasons: its size and its history.

Large Green Space Within A City

Central Park is a large urban park in Manhattan, New York City. It runs from 59th Street to 110th Street (4km long) and from Central Park West to Fifth Avenue (0.8km wide). The Park was established in 1857 and is now a National Historic Landmark.

Like many things in this world, Central Park is a beautiful place with an unfortunate history. Before 1857, some of the land on which Central Park is situated used to be Seneca Village (five acres in the intersection between 82nd and 89th Streets and 7th and 8th Avenues). This village was founded by free black people in 1825, making it the first major community of black property owners in Manhattan. There were homes for over 200 people, a school, three churches, and five cemeteries. Eventually, Seneca Village was also inhabited by other minority groups, including German and Irish immigrants.

By 1857, New York City wanted the land to build their new vanity project, Central Park. Of course, the inhabitants of Seneca Village did not want to give up their land. One, it was their home. And two, back then the only way for a black man to have the right to vote, he (unlike his white counterpart) needed to own $250 worth of land. New York eventually claimed eminent domain, stole the land, shoved money at the displaced people, and destroyed the village.

Today, researchers and archaeologists are learning more about Seneca Village’s almost-forgotten story. To date, artifacts and building walls have been found in that area of Central Park. Fun tidbit: a cousin of mine, Herbert Seignoret, is part of this project! If you’re curious to learn more, check out the project’s website.

When we first arrived at the entrance in Manhattan on 59th Street (central Park South), we had several options by which we could have explored the park: cycle rickshaws, horse and carriages, or our own two feet (cycle, walk, etc). 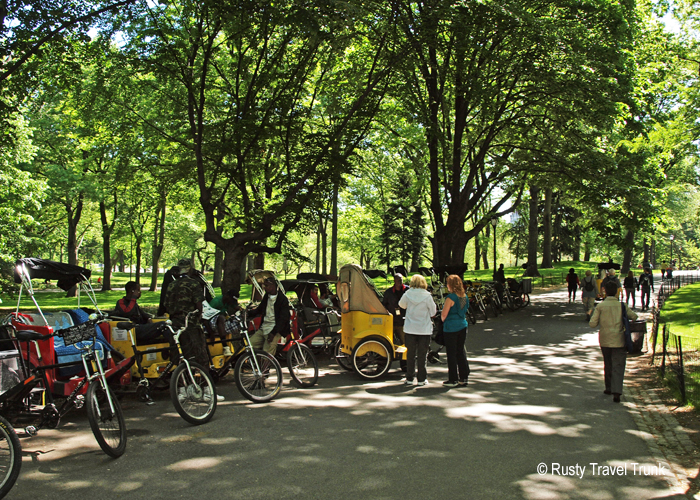 We visited Central Park in late spring; there were lots of pretty plants and blossoming trees to admire. It was literally a chance to stop and smell the flowers! 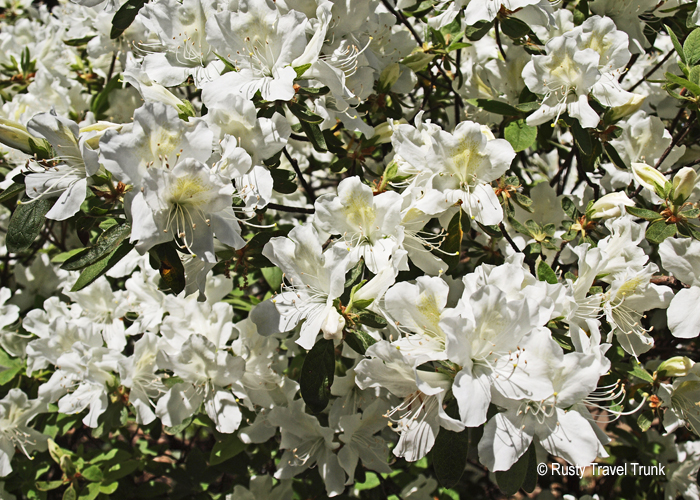 One of the fun things about Central Park was all the musicians scattered around. They covered many styles of music, ranging from a solo harpist to a full jazz band! One can definitely pass the time by appreciating some good music!

As a fan of architecture, I especially appreciated all the different styles of bridges and staircases throughout the Park. There are 36 bridges in Central Park and not one is like another! 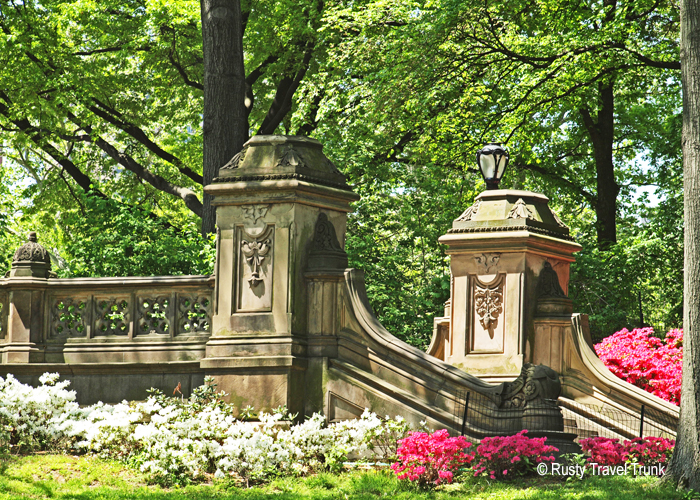 The main fountain in Central Park is the Bethesda Fountain. Finished in 1873, its sculpture was designed by Emma Stebbins, the first woman to receive a public commission in New York City. The sculpture is bronze and the angel itself is 8 feet tall. 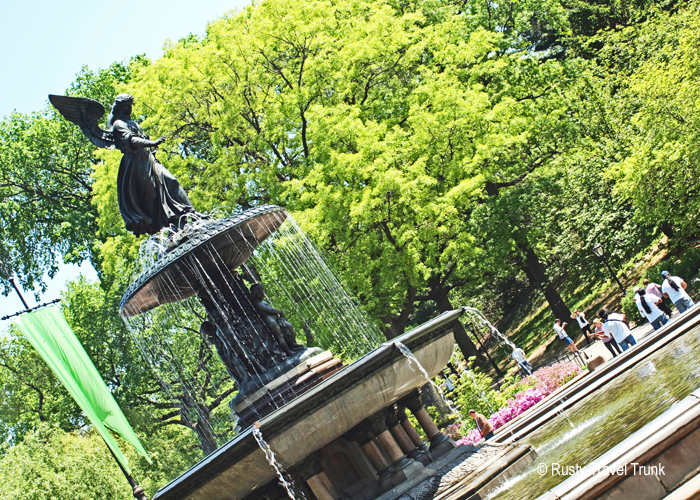 The heart of Central Park, Bethesda Terrace, is a great place to hang out. In fact, that was precisely its original purpose – a place to see and be seen. Around the fountain is exposed to the sun so if it is too hot, duck under the Bethesda Arcade. Restored in 2007, the Arcade is decorated with almost 16,000 handmade encaustic tiles imported from England. 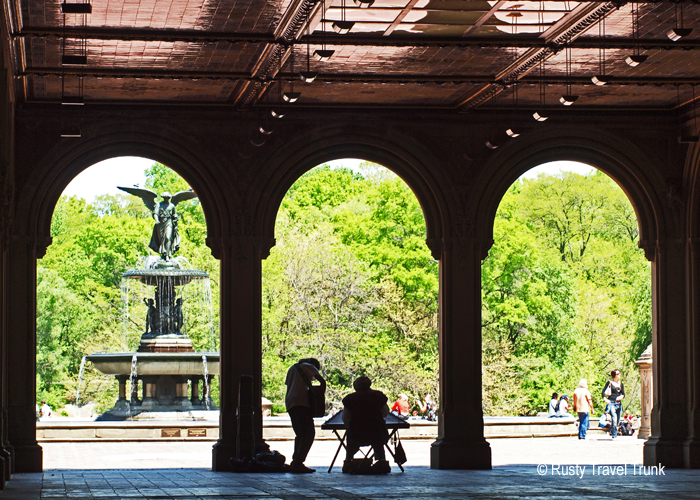 Central Park is a great place in which to find inspiration if you’re a painter. Just find a shady quiet spot somewhere and draw or paint to your heart’s content! 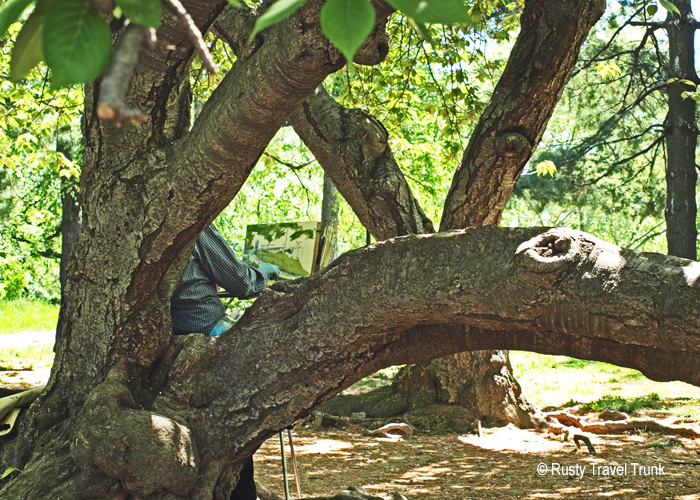 A main feature of Central Park is “The Ramble and Lake” – a planned woodlands area (that really should be an oxymoron) where people can experience ‘wild nature’. The Lake helps (not really) contribute to that concept. The fun thing about the Lake, though, is that people can rent rowboats and paddle around. 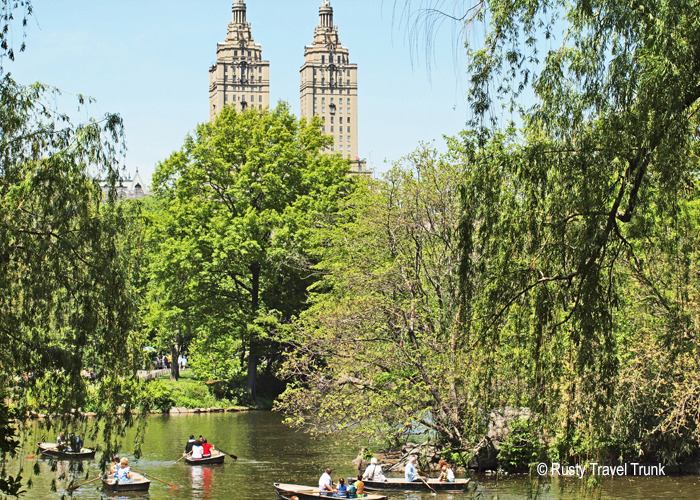 Since there are 36 bridges throughout the Park, it goes to say that there are about that many tunnels. Some are short if the bridge itself is short while other ones, like this awesome one, is long. Again, shelter from the sun! 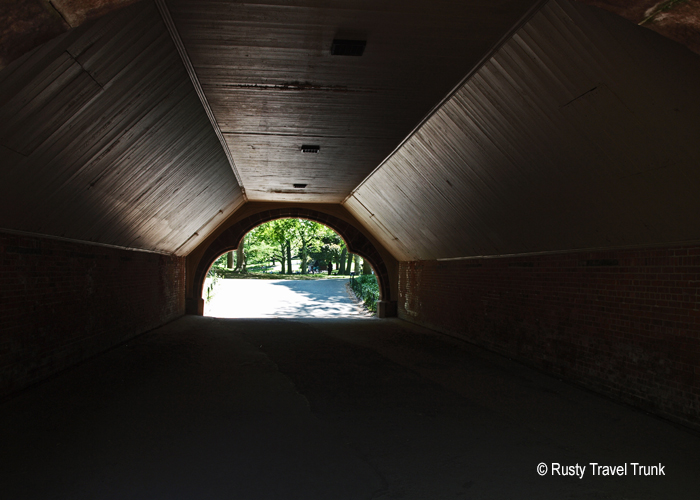 Staircases! There are tons of these as well. While the fanciest one is probably at Bethesda Terrace, I quite liked these simple stone ones. 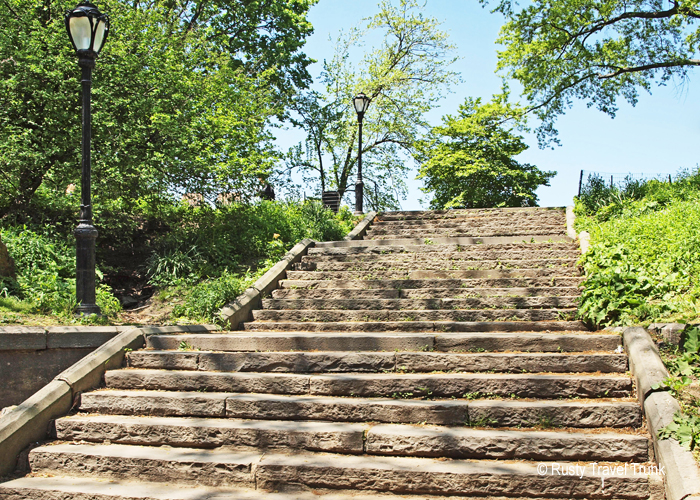 Conservatory Water is where one can indulge in sailing model sailboats. You know you’ve always wanted to try it…. This pond is apparently designed after 19th century Parisian model boat ponds. During the winter, this pond becomes a skating rink. 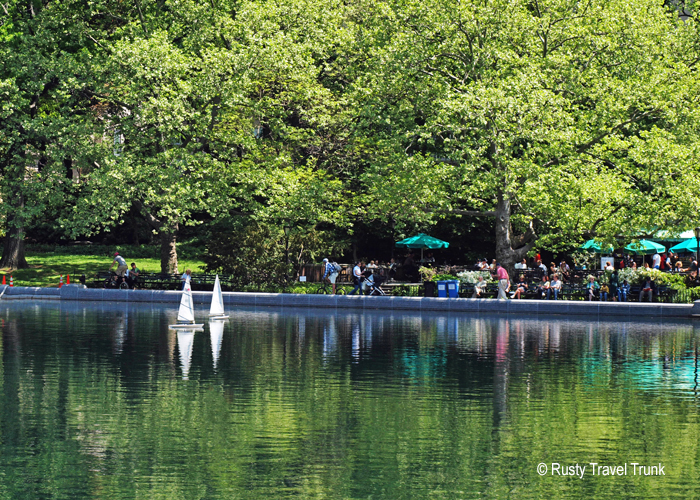 Near to Conservatory Water is a statue of Hans Christian Andersen. The children’s author is depicted as reading The Ugly Duckling. 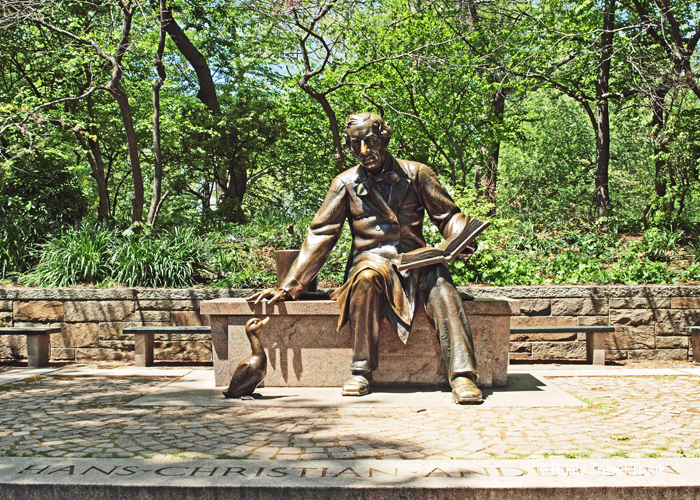 Finding quiet corners for oneself is something I’d do, too, if I lived in New York City! 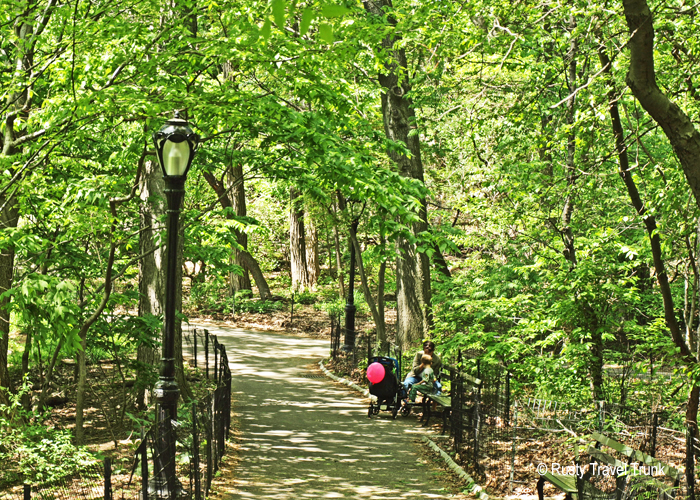 Arguably, Central Park is one of the most filmed locations in the world so your chances are relatively high in finding something. We found what seemed to be a low budget music video! 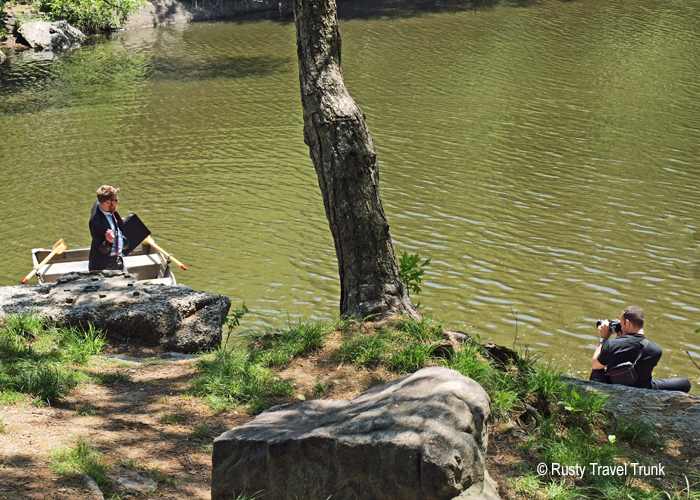 Instead of Netflix and chill, why not read and chill by The Lake? 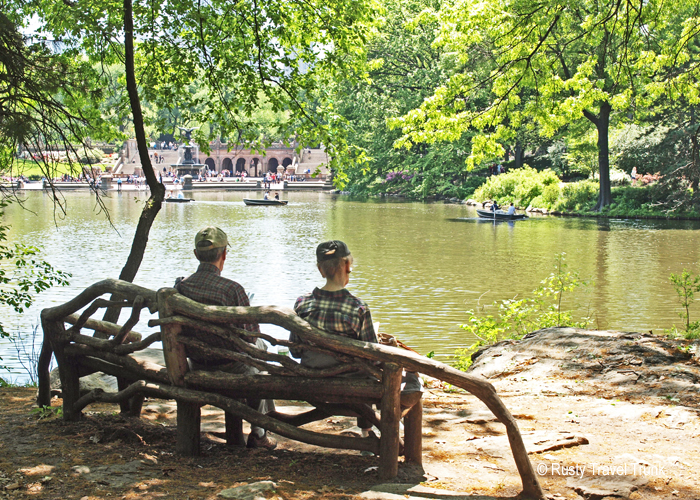 Did you know Central Park has a castle? It was designed to be purposeless on purpose – this is apparently called a Victorian Folly, a thing that provided nice views but really has no point. You can only roll your eyes at the idle rich…. Thankfully, today the castle, called Belvedere, has a purpose in life. It is now used by the National Weather Service to measure weather…things… 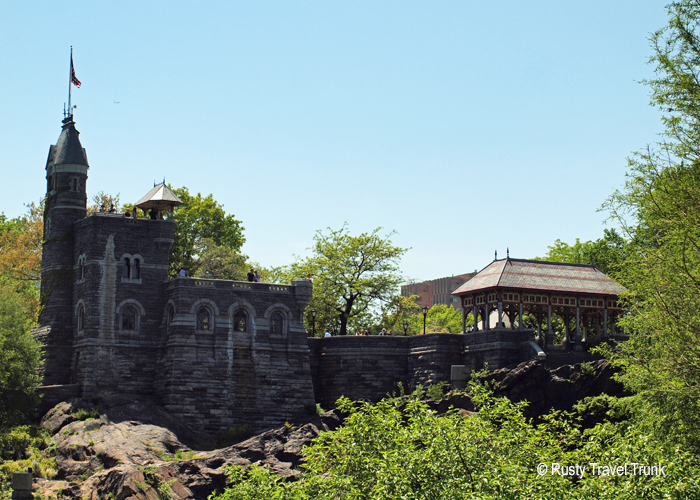 Central Park, not surprisingly, is also a very popular place for photo shoots, including wedding shots!

There is no real need to bring food on a visit to the Park unless you have dietary restrictions. There are quite a number of food trucks and carts just waiting to tempt your taste buds. Some are your regular hot dog carts or pretzels or ice cream. Others, however, are yummy yummy dessert waffles! 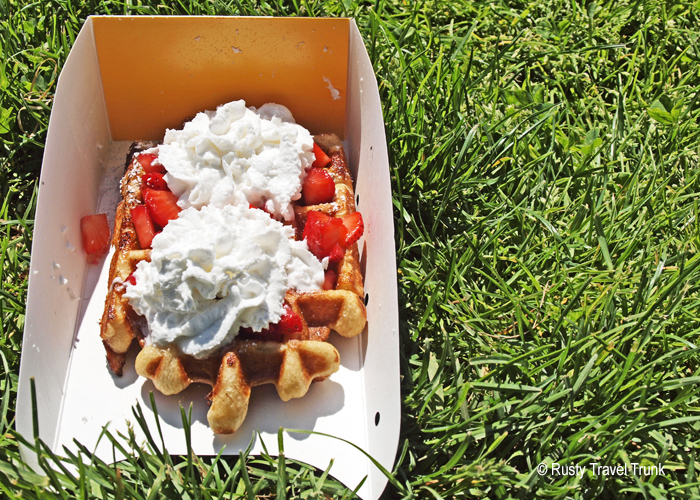 There are plenty of fields throughout the Park, allowing people to play a wide variety of sports. On our walk, we saw people casually kicking around a ball, running after Frisbees, and teams playing the quintessential sport of baseball. 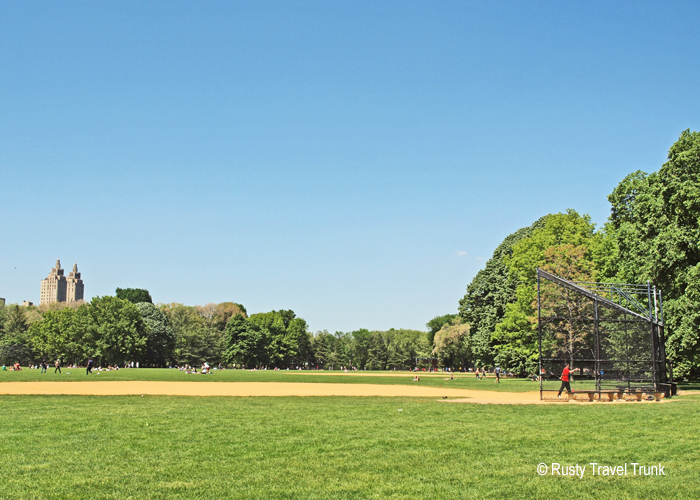 What I really found neat about being in this amazing green space was knowing that just outside its boundaries as a bustling and hectic city. You’re reminded of that by the tall buildings towering over the tall trees of Central Park along the park’s edges. 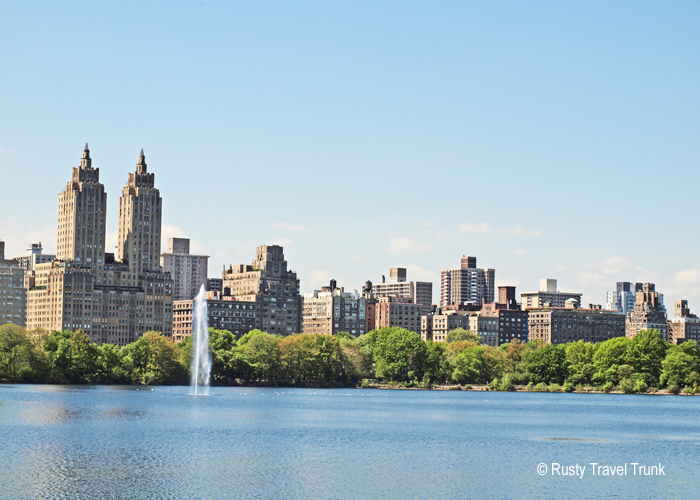 When a friend and I explored Central Park with the aim of seeing as much of it as possible, we strolled around as well as indulged in some lazy people watching and stuffed our faces with street food. It was six hours well spent. Yup – six hours!

My name is Kendra and I am a cubicle escape artist: I try to find ways to keep my job while also trying to escape it as often as possible. When I travel, I’m generally that solo female you see wandering with a camera firmly clutched to her face as she traipses around while narrowly avoiding being hit by some form of local transportation. 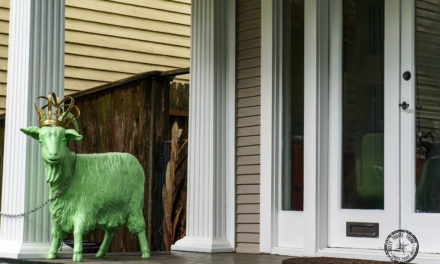 Check Out the Garden District of New Orleans

What to Do in Jackson Square, NOLA 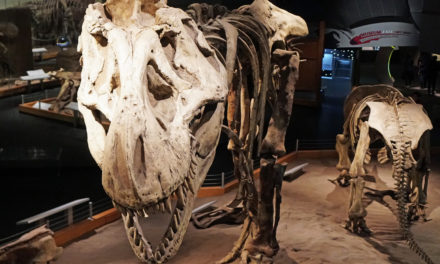 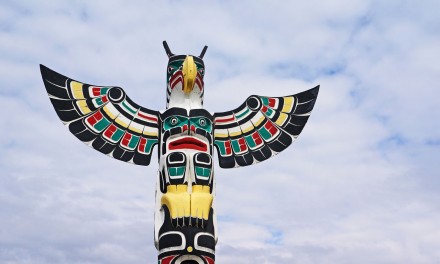 I would love to hear from you! Cancel reply

This site uses Akismet to reduce spam. Learn how your comment data is processed. 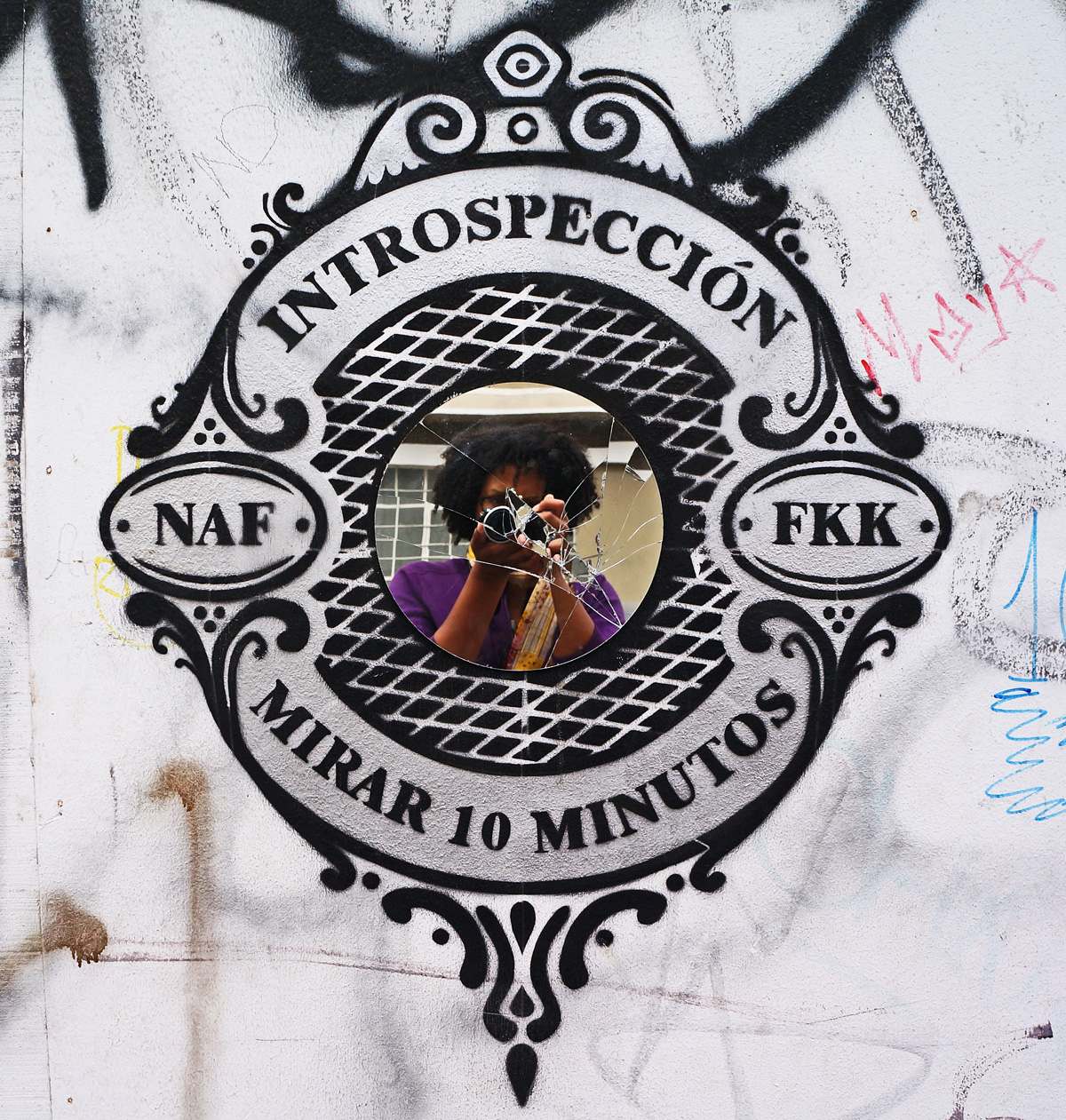 My name is Kendra and I am a cubicle escape artist: I try to find ways to keep my job while also trying to escape it as often as possible.

When I travel, I’m generally that solo woman you see wandering with a camera firmly clutched to her face as she traipses around while narrowly avoiding being hit by some form of local transportation.

Join the Rusty Travel Trunk community on Facebook! You’ll be notified of new posts, all of which are filled with adventure and useful information, as well as other various travel related fun stuff. Come on over and say hi!